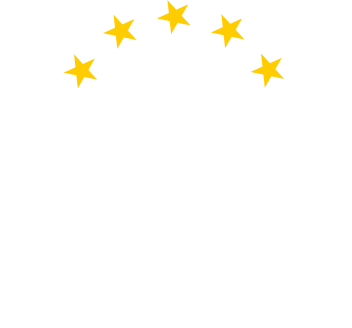 It is an honour and a privilege to host the FUEN’s biggest event of 2017 in Cluj-Napoca • Kolozsvár • Klausenburg,
the heart of Transylvania, a historic region of Romania that many different communities have shared for centuries. Romanians, Hungarians, Germans, the Roma, Jews, Armenians and many others call it HOME, regardless of the tumultuous past they lived together.

The FUEN Presidium, the General Secretariat, the RMDSZ
and a wonderful local congress team welcome you all!
more please!

We hope to
see you in 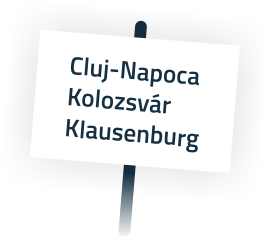 Cluj-Napoca • Kolozsvár • Klausenburg is the capital city of the Hungarians in Romania, which also hosts the headquarters of the RMDSZ, the main organizer of the FUEN Congress 2017. Kolozsvár was the first city I moved to when I left my hometown. To me this city means culture, study, love, a first job, a vibrant nightlife and friendships that last a lifetime. They all melt into a unique cocktail of memories. I am proud to bring the FUEN Congress to Kolozsvár and show our town to the FUEN family.

We welcome you with a varied thematic agenda, exciting cultural events and some sightseeing. The main topics of the Congress will be revealed step by step, the panels will be field with speakers. We wish to bring some hot topics into the debate on European minorities starting with the Minority SafePack initiative.

We will speak about the future of the Minority SafePack Initiative, the challenge of modernity and innovation for the minority communities, about the perspective of autonomy, and the contribution of minorities to the European cultural and linguistic heritage.

The 2017 Congress in Cluj-Napoca • Kolozsvár • Klausenburg will not only involve the member organisations but also relevant institutions, political groups, think-tanks, research centres, universities and other partners, because the FUEN’s work relies very much on our vast network, rich in resources. 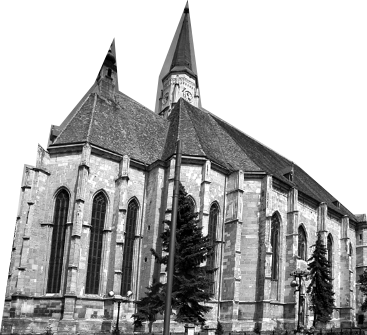 is the second largest church (after the Black Church of Brașov) in Transylvania. Built in Gothic and Baroque style, the construction was completed between 1442-1447, the old tower between 1511-1545. 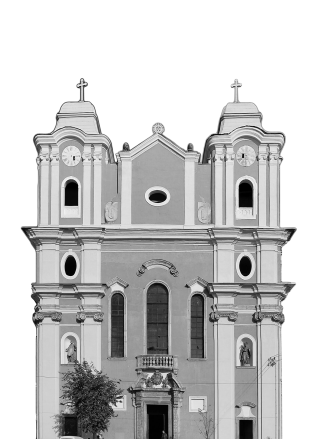 dedicated to the Holy Trinity, was the first Roman Catholic church built in Transylvania after the Protestant Reformation, as well as the province’s first Baroque church building. It served as a prototype for numerous other churches in Transylvania. 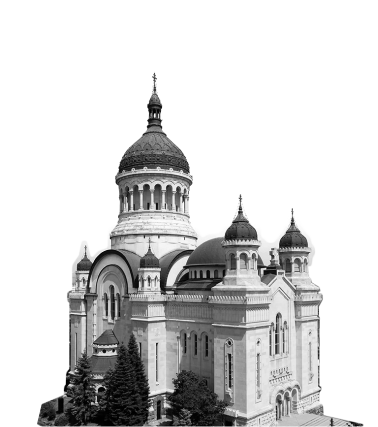 Dormition of the Theotokos Cathedral

built between 1923 and 1933 in the Romanian Brâncovenesc style, a synthesis of Renaissance and Byzantine architecture, the Dormition of the Theotokos Cathedral is the most famous orthodox cathedral in Cluj Napoca. The main dome is inspired by the dome of Hagia Sophia in Istanbul. 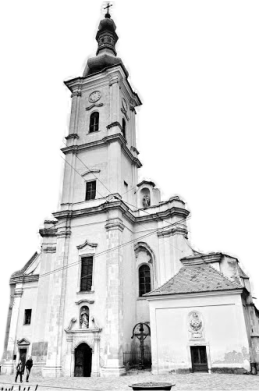 is one of the oldest and most significant buildings in the city, built in XI-XII centuries, but destroyed during the first invasion of the Tatars (1241). Its place was built in 1260-1290 during a late Romanesque church, rebuilt in the fifteenth century Gothic style. Inside the monastery is a famous library of the Franciscans, a collection in excess of one thousand volumes. 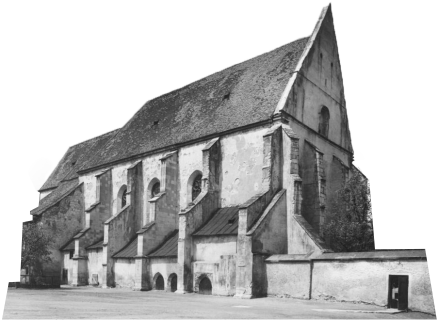 The Reformed Church on the Wolves’ Lane

is one of the most valuable Gothic buildings in Transylvania and the largest Gothic of its type (with a single nave) in Transylvania and South-Eastern Europe. It was built between 1486 – 1510, with the support of King Matthias Corvinus. In the interior of the church can be found the richest collection of coats of arms and seals in Romania, belonging to Transylvanian nobles. 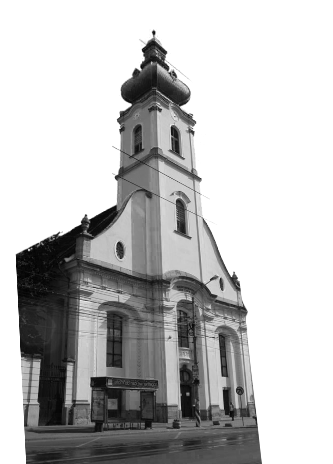 was built in 1791-1796, in Baroque style, with rococo and neoclassical elements. Above the entry portal is the Latin inscription „IN HONOREM SOLIUS DEI - MDCCXCVI" (in honor of the one God - 1796). Inside the church there is a huge round rock, on which, the legend tells that, in 1556, Francisc David stood when held a sermon after which the citizens have turned to unitarianism. 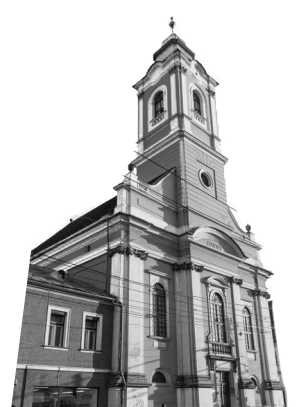 was built in the period 1816-1829 in the combination of the baroque and neoclassic style. Its walls were built of stones from the so-called Bastion round. The front of its 43m high tower is marked with the inscription "Pietati." 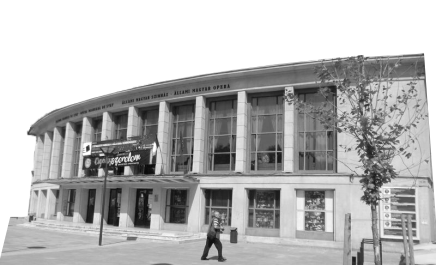 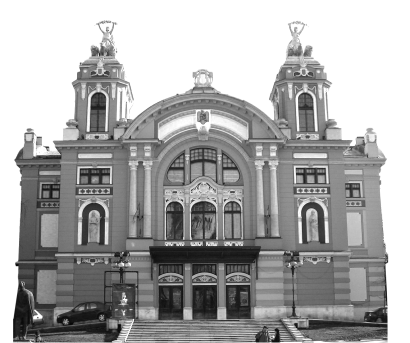 The National Theater and Opera of Cluj-Napoca

is one of the most valuable architectural monuments of the city and also one of the most representative examples of architecture from the first decade of the twentieth century in Cluj-Napoca. Formed after the Union of Transylvania with Romania in 1918 as the National Theatre, the company is distinguished by being the first Romanian-language theater company in Cluj. 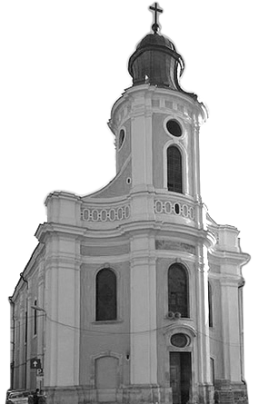 known also as the Minorites’ Church was built in 1778-79. In 1924 Pope Pius IX gave the church to the Greek-Catholic Church to serve as the cathedral of the Cluj-Gherla Eparchy. 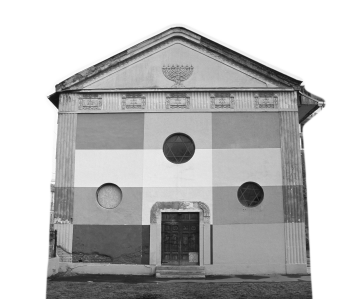 was the synagogue for the Orthodox Jewish community of Cluj. It was built in 1875, in the communist times it was used as a storage space, nowadays the building is a space of contemporary art.

The registration period has ended!
If you have additional questions please mail them to congress@fuen.org.

*depending on your stay

You can choose a version from these packages at the Register menu.

Getting from the airport to the city

After arriving to the Cluj Napoca International Airport, the easiest way to get to the centre is taking a cab. You will find a line of taxis waiting in front of the terminal. Even if all of them should be official, it’s recommended to check the badge and number when entering. The average cost to the centre is about 15-25 RON. Make sure that the driver turns on the meter at the departing.

You might choose a budget solution: the cheapest way is to local bus No. 8 or No. 5. After leaving the aiport area, you will find a bus stop to 50 m right from the exit. The ticket costs 4 RON (less than 1 Euro), and you can buy it at the small kiosk labeled “Bilete”at the bus stop. 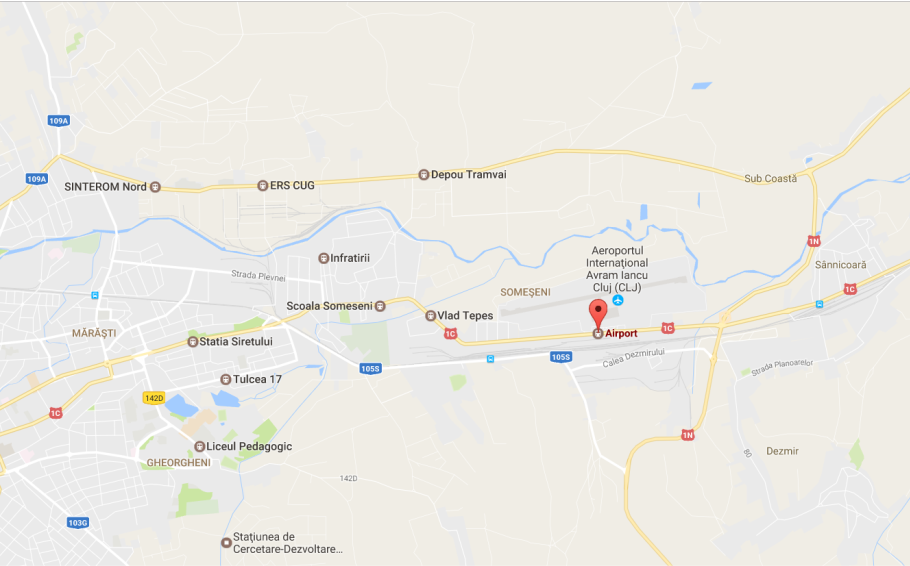 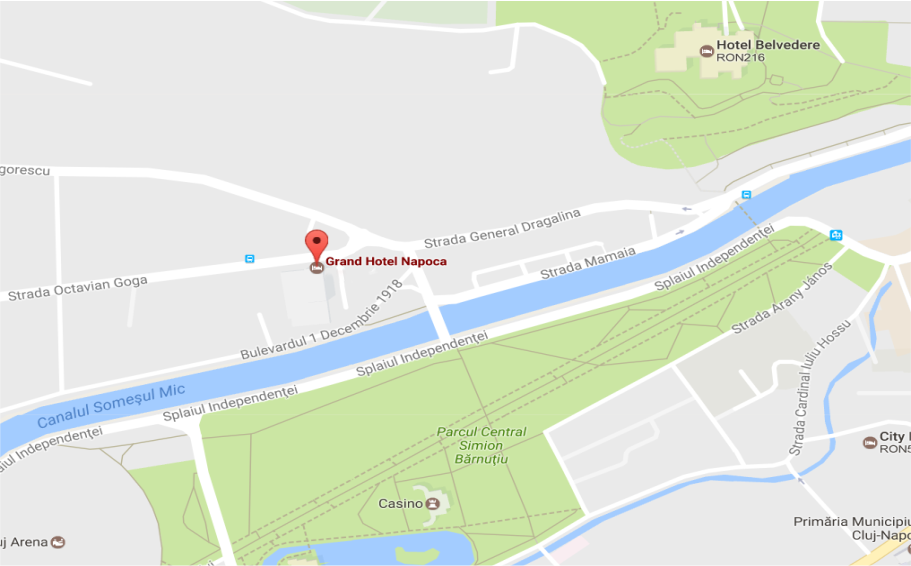 The Grand Hotel Napoca is located close to the centre, with great view on a park and the Somes river. To get there and if you prefer walking, you just have to follow the tram line to the left from the Mihai Viteazul Sq. If you choose public transportation, take one of the bus No. 26, 27, 28B aor 41 from Dacia stop, near to the Mihai Viteazul Sq.

Spare yourself the trouble of clothing, please follow the suggested dress code:

Perfect choice for a city break

many exhibitions, theatres, operas, concerts, parties and pubs offer unforgettable memories, the panoramic view over the city from Belvedere citadel is a must on your checklist.

that one of the stars of the Oscar-winner Son of Saul, Levente Molnár is an actor at the Hungarian Theatre of Cluj-Napoca?

The capital of Transylvania

The largest city of Transylvania, in Romanian language Cluj-Napoca, in Hungarian language Kolozsvár, in German language Klausenburg, is also referred to as the capital of the region. In fact, throughout history, as either an independent principality, a part of Hungary or later the Austro-Hungarian Empire, it has been the trade capital of Transylvania. In 1918 when Transylvania became part of Romania Cluj-Napoca lost its regional status and became capital city of Cluj County. With a population of 310,000 (of which 50,000 are Hungarians). It is the second largest city in Romania, and the one of the top 10096th largest cities of the European Union. Hungarians of Romania still regard it as their capital.

You can feel the historical atmosphere

walking among the old buildings in the city centre or when visiting the medieval Saint Michael’s Roman Catholic Church, the Gothic-style Reformed Church of Farkas Street, or the medieval streets around the birthplace of 15th century Hungarian King Matthias Corvinus.

Today’s Cluj-Napoca (awarded the title European Youth Capital in 2015) is an attractive destination not only to young students or start-uppers, but also to entrepreneurs, artists, actors, engineers, researchers and IT-programmers. With its international Airport Cluj-Napoca is Transylvania’s largest gate to the world. The number of tourists visiting here is ascending, breaking the records year by year. In 2016, over 20% of the tourists were coming from foreign countries.

Even if Cluj-Napoca did not win the bid for 2021 European Capital of Culture, its cultural – and multicultural life is at a peak. Did you know that one of the stars of the Oscar-winner Son of Saul, Levente Molnár is an actor at the Hungarian Theatre of Cluj-Napoca?

We are
proud of

our rich nature, of our mountains, forests, caves and lakes, our fresh air and abundant mineral water springs.

Should you seek to

experience an authentic rural place, with a lively tradition, you ought to visit the gorgeous Hungarian villages of Szeklerland, or the famous Romanian villages in Maramureș.

We are sure you’ve already

heard something about Transylvania. If nothing else, you must have heard about Dracula. Albeit vampire stories are a tourist favourite, we are more proud of other things, such as the values, traditions and heritage, which our community keeps alive and passes on to future generations.

We are proud to say

Transylvania is culturally and linguistically colourful, a trait which stems from a long history of different nations- Hungarians, Saxons, Romanians, Armenians, Serbians, Gypsies, Jews, Turks, and so on - living together peacefully.

Transylvania was a region of the Kingdom of Hungary, which, later, together with Austria formed the Austro-Hungarian Empire. A large part of our current infrastructure (cities, schools, churches, roads, railroads and factories) had been built during this time. This is why you may often stumble upon Hungarian inscriptions on historical buildings.

Strolling down a street in Transylvania

you may also meet Hungarian-speaking people: approximately 97% of the Hungarian minority of Romania, a community of around 1,200,000 people, lives in Transylvania, and more than half of them call Szeklerland their home. The major cities, where you can discover European cultural, economical and student life, are

Our hospitality is a brand on its own,

built upon a Central European influenced gastronomy, excellent local wines and beers, and famous desserts a coffee shop in Vienna might get jealous of, such as the kürtőskalács.

We would bet you would give up your diet for a few days once you arrive here.

programiroda@rmdsz.ro
Please choose your status on the first page!
Romanian press form is different from the others. Your participants fields have been reset.
Terms and Conditions of Event Registration
Error